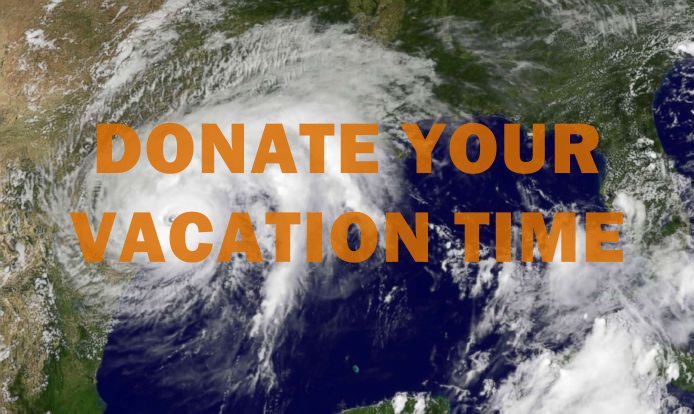 Hurricane Harvey tore through Texas and Louisiana, moving slowly from August 25th through August 30th, before moving out of the area and dumping flood waters in other parts of the nation as well.

The devastation caused by one of the worst hurricanes in recorded U.S. history has left many asking what they can do to be of help in relief efforts. Many employees may be asking what contributions they’re able to make in partnership with their employer. The IRS has announced that it will permit employers to set up tax-favored leave-based donations programs.

Under leave-based donation programs, employees are able to donate a portion of their vacation, sick or personal leave time in exchange for cash payments their employers can make to qualified charitable organizations. The value of the leave donated by employees for Harvey-related relief will be excluded from their taxable wages. Therefore, donations will not be subject to withholding for taxes including federal income, Social Security and Medicare, and federal unemployment insurance.

It’s important to help employees understand that this exclusion only applies if the donations are:

Additionally, please note that employees who choose to donate leave time are not able to claim the value of the leave as a charitable deduction.

The IRS is informing employers that they should not report qualifying leave-based donations on employees’ Forms W-2, Wage and Tax Statement, in boxes 1, 3 or 5. They may deduct those cash payments as wages under IRC § 162.

Information on other tax relief available to victims of Hurricane Harvey can be found at www.irs.gov/hurricaneharvey.

As of September 11th, 2017, the IRS had not yet announced a similar donation program to support victims of Hurricane Irma which made landfall in Florida over the weekend. Follow up on IRS.gov for updates as more information on the totality of that storm damage becomes available.

On behalf of the staff of The HR Manager and The Applicant Manager, we’d like to convey our best wishes to everyone who has been affected by the recent hurricanes.